WORKING WITH IT
The Persimmon Series, Book 3
by Cass Alexander 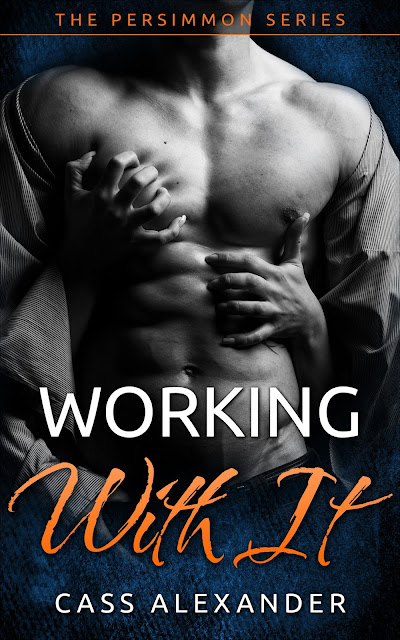 Morgan Pottinger is counting the days until graduation. Her plans are to leave small town Kentucky and never look back. As she starts her senior year at Persimmon College, she finds herself the object of Nate Stevenson’s affections. Despite her spaz-like tendencies, Nate makes it clear he wants her. Morgan cannot resist the sexy, intelligent guy that keeps her on her toes and ties her up in knots.

There’s just one problem. Morgan needs to break up with her hometown boyfriend before pursuing anything with Nate. A series of catastrophes back home continuously interfere with her attempts to end the relationship. At this rate, she’ll be married to the loser by March and Nate will be just another casualty in the disaster that is her life. Lucky for Morgan, Nate’s much smarter than she is.

I look at my watch. It’s almost midnight. I check my phone for the hundredth time, wondering why Morgan hasn’t texted me.

I assume she’s trying to finish up her essay, but I had hoped she’d at least acknowledge my two texts.

We didn’t have much contact this week, with her being in Planters Grove. It brought about a dimness to my days, not seeing her. I didn’t like it.

She did reach out and let me know that Alex was going to lose his arm. I feel bad for the guy. Not bad enough to let go of Morgan, but I’m not made of stone.

I get the feeling she’s trying to avoid me. I assume, with the removal of his appendage, she was unable to have a frank talk with him about their relationship. And I get it. I won’t push her on it. But I need to figure out how to help her through this process.

I take another sip of beer, only half listening to the conversation taking place in my room. We just finished up some games of Euchre. Now that my mind’s not focusing on cards, it’s obsessing about the little brown-eyed vixen living across the street.

I thought about knocking on her window, but realized she might need space to process. I’ll give her until tomorrow before I seek her out, assuming she still doesn’t return my text.

I pull out my phone to text her once more, to say goodnight, when I hear the familiar lilt of her voice coming from the hallway. It causes the neurons along my brain-gut axis to start going nuts. Will there ever be a time when she doesn’t give me such a primitive reaction?

Morgan appears in the doorway and flashes a big, goofy grin. You don’t have to be a genius to see that she’s been drinking. It’s cute.

“Hey, y’all!” she says to the group. Her usual subtle Southern drawl is especially twangy tonight. I think drinking brings out the Kentuckian in her.

“Hey, Morgan,” Penny responds. Nugget, one of our pledges, waves.

“Everybody out,” I command as I get out of my chair and put my beer on the coffee table.

“What? Why?” Nugget protests.

I glare at him. I’m not angry, I simply want to communicate through intimidation that his little ass needs to vacate my room immediately.

He looks over at Morgan, then back at me and shakes his head. Then he makes a huge mistake.

I step towards him, ready to grab him by the shirt and toss him out the damn window. No one will refer to Morgan as a ho in my presence, even as a joke. I hesitate when I hear her snicker.

“Ah, Nugget,” she says, “God wasted a perfectly good asshole when he put teeth in your mouth.”

A fierce swell of laughter overtakes the room, from everyone but Nugget. I can’t help it. That might be the most superior affront I’ve ever heard. In fact, it may have just saved his little ass from a long drop to the ground. 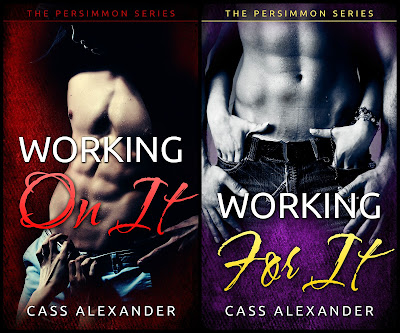 WORKING ON IT ✯ WORKING FOR IT 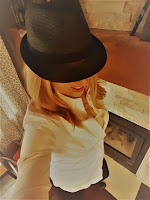 Cass Alexander is the pen name of a Southern born and bred public school teacher. Her brother, who insists she address him as, The Prince of Darkness, gave her the nom de plume after warning her that her book’s content may scar her sons for life.

She’s a connoisseur of fine humor, hilarious insults, and all things chocolate, preferably dark (like her humor). Oh, and wine. Let’s not forget the wine. Cass also enjoys running. It’s become crucial to her survival, due to her consumption of wine and chocolate.

Cass’s mission in life is to spread the love and the laughter, goodness knows it’s needed. It’s why she wrote The Persimmon Series.

She and her family now reside in the Midwest, where hardly anyone other than Cass says the words, y’all and holler.