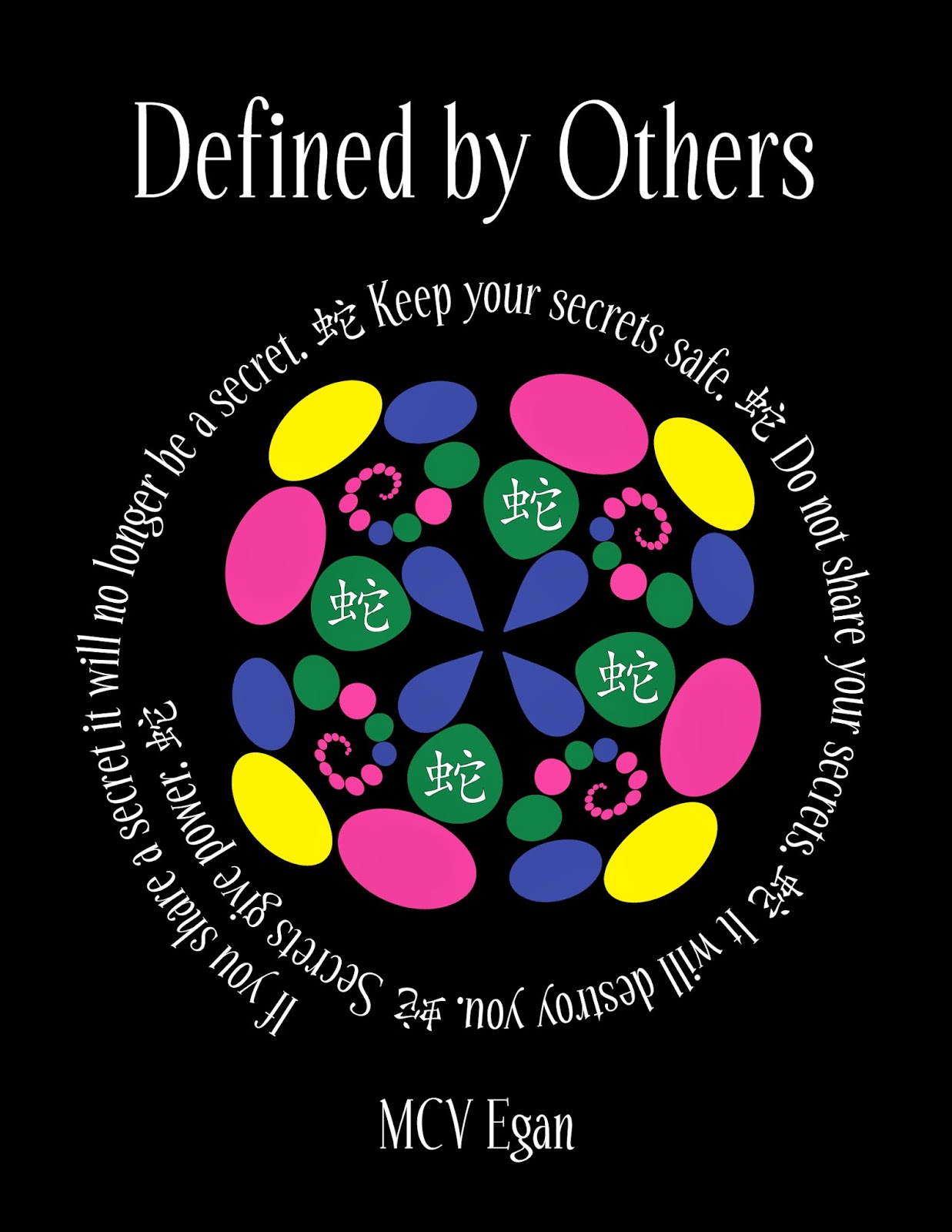 A word, a single word defines a moment for Anne. She needs to find a new one when her spouse leaves her at the age of 47, coming out of the closet literally in a closet. She finds herself back in her hometown amongst her high school friends which she left behind in her past.

An inheritance from a friend leaves her with the means to meddle and spy on the lives of some of their mutual acquaintances. In an attempt to run from her reality Anne gets engrossed in a game of "fun" and "flirtation" with her friend and fellow sufferer Connie at her side. Anne however did not read all the files and what to her is fun games turns into a deadly reality. It is no longer a game.

Life, death and not even a defining word can stop the reality of manipulation.

I sat in Pete’s office after the video ended staring at the screen with her frozen image. She looked gaunt and ravaged by the illness that had eventually taken her life. When they lowered her coffin into the grave the day before I felt that my youth and much of what makes life feel like an adventure was being lowered into the ground with her.

As I stared at the image my mouth felt dry, my hands had a slight tremor and even in my thoughts I could not quite find the right word to define the moment, to define my feelings. I burst out crying in loud wracking sobs and I heard the door open, through my heavy tears the contact lenses swam and moved in my eyes and everything seemed a blur. I felt the hand on my shoulder and as he handed me the tissues he said,

“Can I get you something? Anything? Water? Coffee?”

I blew my nose and composed myself as best I could.

As he walked towards a bar in the back of his office I heard him say,

“It’s a little early but I can offer you something stronger if you prefer.”

“No thanks, water with ice will be fine.”

The musical clink of the ice cubes against the glass was the familiar tone made only by fine crystal. I recognized the Baccarat pattern, it was the same as the crystal in my parents’ home. He hesitated and cleared his throat before he spoke again.

“I know speaking ill of the dead is in very poor taste but Amanda was not a nice person. I am bound as her attorney to follow her instructions to the letter, you can watch; what is obviously a pretty nasty recording as many times as you wish, but when you are done I need to destroy it, in front of you. Then I am to hand you a box and again you are to open it in absolute privacy, so preferably not in this office. Can I suggest I destroy it right here and now? I have pliers and I can smash the flash drive into nothing.”

“It really is not at all what you imagine. She was even nice and apologized in it. She could be an absolute bitch, but my tears and sadness are not for her.”

“We were all surprised to see you at the funeral, I actually expected to fly down to Florida and hand all this to you there. She left a nice expense account for that. How long have you been in town?”

“Just a few days, Mom assumed they’d be flying up for Thanksgiving. They are so afraid Obama will get re-elected after the Romney tape that they wanted to vote in person.”

“He might win you know. Although you would not know it in this town by the Romney signs everywhere.”

“Yeah, yet another choice where I absolutely failed my parents.”

“Don’t knock yourself, I do not think any of us live up to parental expectations.”

I drank the ice cold water and nodded my head at the screen, no words were needed he closed the file Amanda’s face disappeared from the screen. He pulled out the flash drive and reached into a drawer, as he crunched and cracked the flash drive that was when I knew, he too had fallen prey to one or more of Amanda’s nasty games.

“I think it is pretty done. If you are not sure why don’t you shoot it?”

That was when we both started to laugh, I did not recognize it then but that was precisely when we bonded, laughing over the nasty remains of a common enemy. I gathered my things including the package Amanda had bequeathed me and Pete walked me to the car.

“It would only be a conflict of interest to offer help in anything regarding Amanda, but if you need any help with your parents’ home, don’t hesitate to call me. Do you have the card I gave you yesterday at the funeral?”

“It is such a small town Pete, even if I lose the card, now that everyone knows I’m here it will be hard to avoid me.”

I stopped at the grocery store on my way home. Everyone in town knew I was there, so there was no sense in driving into the city to get what I needed. I had already put a nice dent in mom’s pantry and dad’s bar. I had been there well over a week, trying to understand what I had missed, how I had not known about Frank. Then Amanda died and curiosity got the better of me. What did Alison say?

“Enemies always attend each other’s funerals. I guess it is a way of knowing they won…”

Well, we weren’t always enemies, and sometimes it is the good and healthy memories that make someone go to a funeral. Amanda was the first of us to die. At 47 it seemed too young to bury a contemporary. Once she was diagnosed it was only a matter of time, it was pretty amazing she lasted as long as she did, but if nothing else money can buy you time and in 2012 time can mean science and technology might just come up with some medication or medical treatment that changes everything.

It had not worked for Amanda, but so far it had worked for my dad. This last stroke seemed to be the first time he had an untimely health issue, with no easy fix in site.

Amanda fought hard for a good two years and then lost, the image of her greenish skin color and emaciated body made that perfectly clear. Her beautiful heart shaped face was gaunt and her eyes sunken in the video, the voice was the strangest and most unrecognizable trait. Was it Karma to go so slowly and with so much suffering? Our shopping Carts collided and I was as startled by that as by the tone of her voice.

“Connie? I just assumed you were not in town. I did not see you at Amanda’s funeral yesterday.”

“I don’t like funerals. I sent flowers. I saw the comments on Social Media. I was surprised you were there.”

“Social Media? I have avoided social media, the only use would be spying on my kids.”

“Most people use it. In a very public way.”

Cyberspace helping small town gossip. I was so detached from the experiences of my youth and my past. I could not imagine there was anything I had missed that mattered in the here and now.

“You know, my dad is really ill, I am just here getting the house in order and figuring out the best way to help them get settled in Florida full-time.”

“I’m sorry about your dad. Can I come over tonight? I’ll bring a nice dinner, we really need to talk. It’s about Frank.”

This time I could easily put a word to define the situation; Dumbfounded. It is a small town but mom assured me that no-one knew.

“Believe me it is just as uncomfortable for me as it is for you, but we really need to talk. Better said it is about Frank and Mike.”

I learned at a very young age that the moments that define us in life are sometimes as concrete as a ton of bricks falling loudly and painfully on top of us. This was one of those moments, not at all like the subtle hidden one when Pete and I laughed together.

“Is seven OK? I can bring dinner.”

“You really think we can eat?”

I nodded. I started to pile food like a robot in the shopping cart, as the salesclerk rang it up I wondered why I had chosen all of Frank’s favorites.

M.C. has one other book that earned her many 5 star reviews. The Bridge of Deaths is a true life mystery novel with a love that spans time.

2011 VERSION OF THE BRIDGE OF DEATHS (AMAZON US)

M.C.V. Egan is the pen name chosen by Maria Catalina Vergara Egan the author of The Bridge of Deaths in two versions as well as the soon to be released Defined by Others.

Catalina was born in Mexico City, Mexico in 1959, the sixth of eight children, in a traditional Catholic family. Communication in such a large family fueled her desire and need to find a voice and write.

She only spent her childhood in Mexico. Her father became an employee of The World Bank in Washington D.C. From the early 1970s at the age of 12 she moved with her entire family to the United States.

Catalina was already fluent in Southern English as she had spent one school year in the town of Pineville, Louisiana with her grandparents. There she won the English award; ironically being the only one who had English as a second language in her class. In the D.C. suburbs she attended various private Catholic schools and graduated from Winston Churchill High School in Potomac, Maryland in 1977.

She attended Montgomery Community College, where she changed majors every semester. She also studied in Lyons, France at the Catholic University for two years. In 1981, due to an impulsive young marriage to a Viking (The Swedish kind, not the football player kind) Catalina moved to Sweden where she resided for five years and taught at a language school for Swedish, Danish, and Finnish business people. She returned to the USA in the late 1980s where she has been living ever since. She is fluent in Spanish, English, French and Swedish.

Maria Catalina Vergara Egan is married and has one son, who together with their five pound Chihuahua make her feel like a fulltime mother. Although she would not call herself an Astrologer she has taken many classes and taught a few beginner classes in Astrology. This is one of her many past times when she is not writing or researching.

MC is very active around the net. Besides creating sites about her books, she runs around the social sites, making friends along the way. Click on any of these links and see what MC is up to today.