SPARKLERS OR SPANKINGS
The Celebration Township, book 7
by Stacy Eaton 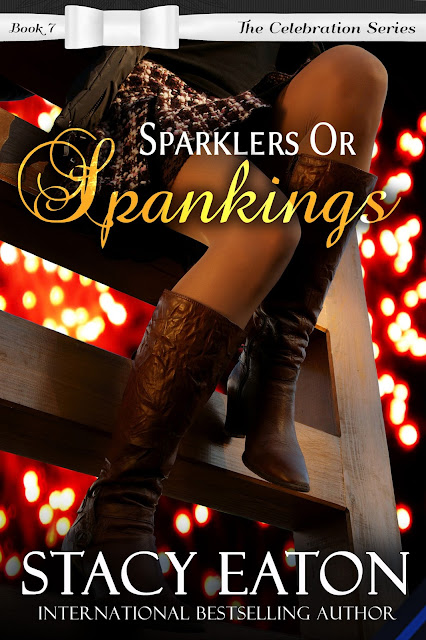 Harper Reed has run her family owned Bed & Breakfast for three years, and recently turned it into a place for couples to spice up their relationships. Harper has a dream for her business and her future, but recent events might upend those romantic dreams.

When Mason Tidewater arrives at her Inn, Harper believes its fate that has brought them together. While Mason doesn’t believe in fate, things start to happen in Celebration Township that could change his mind. Unfortunately, the reason he’s here in the first place, might destroy any chance he has with Harper.

During the Memorial Day celebration Mason must decide if he’s ready for sparklers or spankings, or perhaps if fate is good, he could have both.

“Turk, oh Turk!” Kitty purred and let out a moan so incredibly loud that I wondered if she was about to have a litter of kittens herself.

“You like that? You like how hard I’m giving it to you?” Turk’s voice drifted from the speakers just as a crash came from the front of my inn. I jerked upright so I could see over the monitor. Had someone just come in the front door?

I clicked the pause button on my computer and pushed away from my desk.

“Hello?” I called as I dashed to the foyer area. “Is someone there?”

As I rounded the corner, I came to an abrupt halt. A dark-haired man squatted in a sea of a million tiny pieces of crystal from a shattered vase. His cheeks turned a bright red as he rushed to clean up the mess.

“Oh, no! Don’t worry about that,” I gushed as I hurried forward and tried to wave his hands away. “I’ll get that, I don’t want you to get cut. You’re alright, aren’t you? You didn’t cut yourself, did you?”

The man, reaching for another of the larger pieces of crystal, startled and did a double take when he looked at me. In that moment, I got a brief look at a pair of hooded eyes.

“Are you alright?” I asked again as I assisted in the cleanup. “Please, it’s only a vase. A towel for the water and a broom for the glass, and it will be all gone.”

I glanced up and gave him the biggest and calmest smile I could. He blinked once, then again, before he shifted his gaze to travel down my neck and shoulders.

I cocked my head to the side. My, my, he was a looker—and not just because he was looking at me but because he was handsome. He had sharp cheekbones set into a full oval face with eyes so deep and dark blue that I thought I might fall into them and drown. His full lips opened and closed like a fish out of water.

“Are you alright?” I repeated quietly as he continued to stare at me.

He shook his head and cleared his throat at the same time. “Yes, I’m very sorry.” He drew his attention back to cleaning the mess.

I reached for his forearm, immediately noting the soft, almost silky quality of his suit jacket. Wow, that had to be expensive. “You don’t have to clean this up, I’ll get it.” I gave him another one of my award-winning smiles at which he blinked a few more times.

“Um,” I stood, holding my right hand out, “I’m Harper Reed, the owner of The Inn and Out Bed and Breakfast. Do you have a reservation?” I didn’t recall anyone scheduled to arrive this early in the day, but sometimes people showed up early.

The man ran his entrancing gaze from my toes all the way up, then from my face down my shoulder and along my arm to rest on my outstretched hand. As he began to reach for it, he unfolded himself from the floor, and my eyes widened with each inch that he grew.

“Good lord, you’re huge,” the words spurted off my tongue without thought. The picture of the man on the computer screen flashed to mind. Would this guy be that big in the equipment category? Without conscious thought, my eyes landed on the zipper area of his dress slacks. Huh, maybe they do exist. I averted my eyes immediately as my cheeks began to warm.

A husky laugh vibrated out of his chest as he took my hand. “I’ve heard that a time or two.”

Welcome to Celebration Township. Casey Lowe is new in town and hiding from her past. Her next-door neighbor, Thad Wagner, is a sexy police officer, who is good with his hands, and his lips, but Casey refuses to get involved with a married man, and Thad can't seem to understand why she keeps pushing him away. No matter how they try to stay apart, something keeps drawing them together. When an unexpected visitor shows up at Casey's house the week before Christmas, her future is on the line. Will Thad figure it out in time to save her, or will Casey become a conspirator to a murderer? Tangled in Tinsel is the first book in the thirteen-story novella series that takes place in quaint Celebration Township, Pennsylvania. The rest of the series will begin to release in the fall of 2016.

Linda Maxim is a woman who learned early on how to work hard and succeed. Her only regret is that the man she loved disappeared just days after she got pregnant at the tender age of sixteen.

Fourteen years later, Ian Dugan needs a break from life and ends up crashing his vehicle and waking up in the hospital to find Linda watching over him.

Can Linda forgive Ian for leaving her alone as a pregnant teen? Will Ian be able to forgive Linda and himself when he learns of the daughter he never knew about? Find out on New Year’s Eve if Ian can erase the tears and find something to cheer about.

Jason Hayes loves working as a nurse and living in Celebration Township—or he did until Riayn Simmers showed up in town, and a secret from his past is threatened to be exposed.

Riayn Simmers is shocked to find her college love-and the man she had called a heathen-residing in the same town as her aunt. Now Riayn needs to decide if she can handle sticking around to run her aunt’s bakery, My Baked Buns.

Somehow Riayn and Jason must find a way to coexist in the small town, but what happens when Jason’s secret is exposed and he’s up to be auctioned off at the Valentine’s Day Party? Will the town believe, as Riayn once did, that Jason truly is a heathen, or will he finally win over her heart for good?

Dabby Finnegan got roped into being auctioned off for the annual Valentine’s Party, and nothing could have prepared him to face the vibrant and determined Paige Brogan. From the moment she jumps into his arms to collect her prize, his life will change.

Paige Brogan has had a crush on Dabby for a long time, and this auction is exactly what she’s been waiting for to finally catch his eye. When Paige wins a date with Dabby, the only thing she wants to do is spend the day with him working at his tavern.

As Paige and Dabby get to know one another, Dabby has a hard time understanding why this incredible woman would be interested in him. It’s when the rainbows are overhead, and green beer is flowing that Dabby finally realizes what he has and vows to never lose it.

Missy Moresco might be Celebration Police Department’s police dispatcher, but she’s also got her thumb on the pulse of the township. When FBI Agent Casper Princeton shows up in town on a case, Missy and Casper go undercover to protect the real reason he’s there by pretending they are a couple.

With Missy’s snarky comments and Casper’s quick comebacks, these two find it hard to keep a professional distance. When Casper needs to rush home to a family emergency, Missy is torn on whether it’s a good thing or a bad one. Just when she decides it doesn’t matter, Casper shows up on her doorstep with his five-year-old daughter.

Can Missy and Casper keep the fake relationship going while they wait for his case to come to a head, or will his daughter and his job come between them before Easter arrives?

Corrine Wagner is determined to make a good life for herself and her son while hunting for the perfect man to complete her family. Unfortunately, with her crazy schedule of school and work, her patience begins to run thin with her constantly-in-trouble, five-year-old son, Tommy.

Nolan Tigues has lived across the street from Corrine his whole life—and carried a torch for her almost as long. When Nolan tries to help Corrine with Tommy, she takes it all the wrong way. She can’t believe Nolan thinks she’s a bad mom.

Can Nolan find a way to prove to Corrine that he cares about her—and about Tommy—as more than just a friend, or will Corrine push away the man who could give her everything she’s dreamed of her whole life?

When Sophia Thayer realized that she’d squandered her savings, she decided to take on a second job. She didn’t particularly want to dust off her four-inch dancing shoes and get back into that line of work, but she knew the money would be good, especially if she got the job at Pleasure Your Fantasies.

Scott Allen has had a thing for Sophia since he’d met her, and it wasn’t until she won him at the Valentine’s Day Bachelor Auction that he realized the feeling might be mutual. Although a relationship didn’t initially work out, Scott didn’t give up on a future with her—not until he saw her dancing on stage at a gentlemen’s club and noticed that the owner was staking a claim on her.
When Sophia realizes she’s pregnant with Scott’s child, can the two of them figure out how to move forward and raise the child together—or will her past and present career choices keep Scott from her side?

Stacy Eaton is a USA Today Best Selling author and began her writing career in October of 2010. Stacy took an early retirement from law enforcement after over fifteen years of service in 2016, with her last three years in investigations and crime scene investigation to write full time.

Stacy resides in southeastern Pennsylvania with her husband, who works in law enforcement, and her teen daughter who is working toward her second degree black belt in Tae Kwon Do and on the choral and cheerleading squads at school. She also has a son who is currently serving in the United States Navy.

Be sure to visit her website for updates and more information on her books.

Sign up for all the latest information on Stacy’s Newsletter!