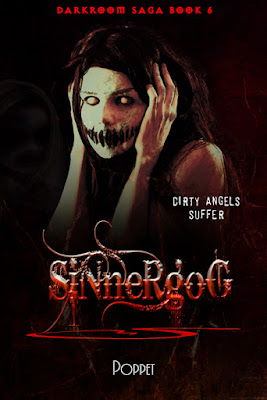 SINNERGOG by Poppet
Darkroom Saga, Book #6
Genres: Psychological Horror | Erotica Horror
— SYNOPSIS —
Part I
Sacrifice wears many masks. In the claustrophobic walls of the Sinnergog untold horrors splatter the walls. It was created as a sanctuary for those possessed by Satan, the last refuge for exorcism and redemption. Named after a temple to worship god, the only thing worshiped here is trauma.

Christopher Ward: It occurred to me that the manifestation of God among mankind was unique in itself. Did He know he was god? Was he always different? Is that why I was persecuted, because Satan never rests and temptation is a rope bridge across the character chasm?

It took me years to understand I am the chosen one, and it is my legacy, my only purpose, to rid this world of evil. I’ve come for the lost, for the sinners. A reaper is not death, it is mercy, it is love, it is compassion. So I taught my firstborn son to show mercy, I taught him to give sinners a chance to repent, I taught him that Eve can’t help herself. If it’s forbidden the female will crave it, and she’ll drag good men down with her into her cesspit of cunning evil. Me and my kind stand between her and good men. We are the intervention, we are divinity and nothing can stop this. Satan has no power here, I am all powerful.

Part II
Victor Ward: knows his father, the Alpha who becomes god, who is so narcissistic and deranged he cannot tell fiction from fantasy - must be stopped. Victor spent his life in service to his father’s cult, but now the veil has lifted from his sight and he knows good from evil, he knows his father is the biggest crime lord of our time, and yet Christopher cannot recognize that he is the personification of the very thing he claims to thwart.

There is only one man who can stop god. His son. Will he die for our sins? Will they follow the script? Or will Victor become the Lucifer of our time? Victor is ostracised from his Eden, and it’s time for payback. The hunt is on. Their egos have grown, they know how to make bodies disappear, they know how to enslave the powerful with drugs and blackmail, and this time the massacre will not end until the father and the son become one, or one destroys the other.

This is the final installment in the Darkroom Saga. Now we learn the origins of pain, and how it perpetrates the legacy for seven generations.

Check out all the books in the Saga over at Poppet's Amazon Page! 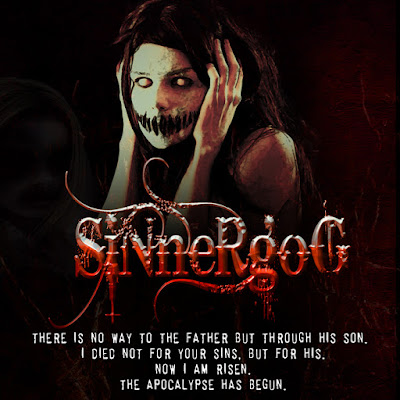 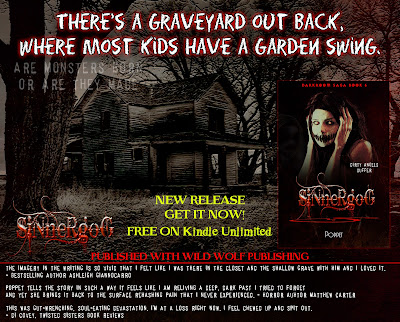 Poppet was first published in Mobius Poetry Magazine, and then spent years writing natural health articles for The SA Journal of Natural Medicine and Renaissance Magazine, before turning her attention to writing fiction, seeing her reach the number 1 spot on Authonomy - run by Harper Collins. Interviewed by journalist David Kentner, Poppet gained exposure across North America with the release of her debut novel Darkroom. Previously published by Night Publishing, Endaxi Press, and Thorstruck Press, Poppet now has more than 50 titles to her credit.

Poppet turned to writing full time after becoming paralysed by Guillian Barré Syndrome. She still takes one day at a time, living a life where joy and peace are her main focus, leaving drama for her novels only.

The central premise of a woman being emotionally and in some ways physically abused by her partner is interesting and holds the reader’s attention. ~ Harper Collins UK editor