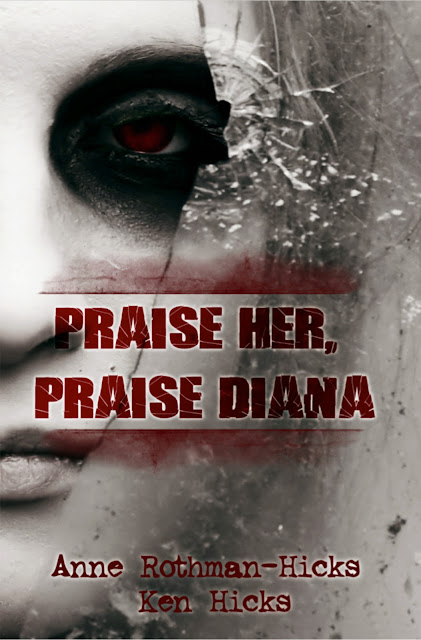 A woman going by the name of “Diana” has started to kill and castrate men in New York City. Her modus operandi is sweet seduction and then a knife to the heart at his moment of climax. These tactics imitate the recent novel by Maggie Edwards, a famous author of women's fiction who was raped a few years before but had never disclosed that traumatic experience. Diana becomes a heroine to women who have suffered sexual violence or the threat of such violence and these women fight back in imitation of Diana while the police try desperately to find out Diana’s identity. Jane Larson, a high-powered New York attorney, represents Maggie and a feminist group called Women Protecting Women. Jane makes the mistake of falling in love with her client and soon finds herself at the center of the action.

Allow me to introduce myself. My name is Diana. You may have heard of me. The Huntress. Goddess of the moon. Beloved of virgins. Never been kissed.

So anyway, I met this guy in a bar near his apartment in New York City. He thought it was by chance—two people locking gazes across a crowded room. I knew better.

It was a dark, dirty place filled with the smell of all the stale beer that had been spilled onto the wooden floor over the course of a half-century or so. When I arrived, his eyes were already bright from several drafts, although he probably would have fought you if you told him he was drunk. He liked to fight. He played rugby just for the fun of hitting people and being hit, and wore his cuts and bruises like trophies.

All the same, he had a surprisingly engaging smile, marred slightly by a cap on one of his front teeth that didn’t quite match the rest. Too bad. His hair was brown and medium length. Slightly tousled, it fell in a cascade over his forehead. His skin was very white, nearly blemish-free, except for a swath of freckles across his nose and cheeks that added to his boyish appearance. You would have liked him at first. I’m sure of that.

He patted the seat next to him at the far end of the bar and bought me a drink. I was wearing a short skirt, high leather boots, and no stockings. A long down jacket was draped over my shoulders like a cape, reaching to the floor. He looked me up and down without apology, weaving this way and that, just a little unsteady on the barstool. He liked what he saw, apparently. With all the beer that had passed his lips that night, he didn’t notice I was wearing a blond wig. I was also wearing my blue contacts. He didn’t notice that either.

He told me a joke about dumb blonds and his hand slapped me on the naked part of my thigh as I pretended to laugh. A minute later, his hand returned to the same spot, tweaking me a little higher up the inside of my leg, like a mischievous child who is sure his antics will be forgiven. I pushed his hand away and he started describing his job and his boss, and I remember thinking, ‘I don’t care about your life, tooth-boy.’ And then there was that hand again, creeping upward along my thigh, and he was chattering away and grinning roguishly at me as though that five-fingered appendage was operating independently of the rest of him, finding its own way in the world.

I moved my shoulders as if I were shivering.

“I’m cold,” I said, hunching over the bar and pulling my arms together. This had the effect of pressing my breasts upward against the unbuttoned top of my shirt. His eyes were glued to that triangle of soft, inviting flesh. There was no subtlety in him.

“I could warm you up,” tooth-boy said, obviously proud of his wit.

The air was cool and the pale clouds of our breath were caught by a light wind and dispersed as we walked down a deserted side street, westward into a neighborhood of small buildings, passing a row of worn brownstone stoops that extended onto the pavement. I had put on my down coat with its neutral unmemorable color, and I now had a similarly nondescript knitted cap pulled low over my ears. I liked the anonymity of it—the sense that a person passing would see just a slightly drunk guy leading a girl to his apartment and that, if anyone were asked, no essential part of me would stand out to be described.

His arm was around my waist, and he leaned against me to steady himself as we walked. At one point he stopped and pulled me to him, kissing me with his open mouth and wet lips and thick rancid beer breath. His left hand pawed at the front of me but couldn’t get past the armor of my coat. “Not here, you animal,” I said to him and he laughed because he thought I was joking.

We lumbered along, trying to match our steps. There was no one on the street but an occasional rat skittering among the garbage cans. Soon we turned up the front stairs to his building and through the dingy foyer with its soiled carpeting and then up one flight where he struggled to get his key in the lock. Here I thought that if I wanted to leave I should do it now. Once I got inside, I knew I would not be able to stop myself. I was already thinking about a certain sunny meadow off a winding backcountry road on a beautiful spring day—the first really warm day of the year—and what was taken from me.

✯✯✯✯Gripping!
By JB Johnstonon
Praise Her, Praise Diana is one of those books that shocks, mesmerizes and makes you go 'ohhhhhhhh' all at the same time! Its definitely not a book for the faint-hearted with some pretty graphic scenes. The book covers such topics as rape, abuse, feminism, sexuality and of course love. Diana is killing men in revenge for being raped. She isn't just killing them though. She is hunting them. Stalking them. Murdering them without mercy or remorse. And, she appears to be copying the murders in a book that author Maggie Edwards is writing. Diana is obsessed with ridding the world of abusive men and her call to fellow feminists seems to spark interest in an extreme feminist group who appear to take her at her word and become her 'followers'. The book plays host to many strong female characters.
The book is interesting in that it explores Feminism to the extreme and makes us question what justice actually means. How far should one person go to get that justice? Is the punishment justifiable? Does it fit the crime? This is a gritty book that sees female vigilantes taking a stand against men who have committed sexual crimes against women. Are they doing the wrong thing for the right reason? That is the moral dilemma the reader will face. An intriguing read and one I really enjoyed. Definitely a book that will make you sit up and take notice and will have you thinking about it long after you have finished it. This book is food for your brain and I love books that make me think about my own views and question what I would do if faced with a similar circumstance. My only gripe is that there are a host of characters in the book to get your head around but that was more to do with me than the book. Highly recommended but only for readers of 18+.


✯✯✯✯A daring new thriller!
By Amanda O'Hara
...I really enjoyed Praise Her, Praise Diana, as you may have already guessed. It has such a unique and twisted plot, and the development of the characters was really well considered. As a young woman who considers herself a feminist and, like most women, all too aware of the rape culture we live in, I can’t say that I didn’t absolutely love the idea of certain role reversals taking place between men and women in this book and having men be inflicted with constant fear. It wasn’t women who were scared of walking down the streets alone at night or encountering strangers now – it was men! And I think the play on that can really open up a lot of important discussions we as a society should definitely be having. With that said, and keeping in mind how extreme some of what I just described might sound, I honestly felt like the subject matter of this book was dealt with both respectfully and boldly all at the same time. Again, it’s definitely the sort of book I can totally picture both women and men having some really animated and frank discussions about...

Anne Rothman-Hicks and Kenneth Hicks first started writing books together while Anne was a student at Bryn Mawr College and Ken was a student at Haverford College— a long time ago, when, as their children like to say, dinosaurs roamed the earth.

In 1973, they came to New York City while Ken attended law school at Columbia University and Anne worked as an editor in publishing. They have lived here ever since and do not intend to leave voluntarily.

They wrote their first novel together in 1976, hoping that it would be a success and Ken would not have to even start working as a lawyer. Alas, that book is still in on the upper shelf of their closet, but they kept at the writing business. In 1984, they published Theft of the Shroud, a novel, through Banbury books, distributed by Putnam. That same year they also published a series of 10 books based on the most popular names for boys and girls, as well as a book about the stars for children. Following these successes, Ken quit law for two years as he and Anne devoted themselves fulltime to writing and their children. However, children need to eat and be clothed and go to school, and these things all cost money, so Ken resumed the practice of law. Still, they continued to write, and rewrite, and rewrite some more.

​​
In addition to Praise Her, Praise Diana, Anne and Ken wrote a mystery with lawyer Jane Larson as the main character called Weave A Murderous Web, Melange Books LLC, 2016. They also wrote Kate and the Kid, (Adult mainstream) Wings ePress 2013; and Things Are Not What They Seem (‘Tween fantasy) MuseItUp Publishing 2014. Anne and Ken have also published two small-format photography books, which are available on the Apple iBookstore – Hearts (no flowers) Signs of Love in the Gritty City and Picture Stones.